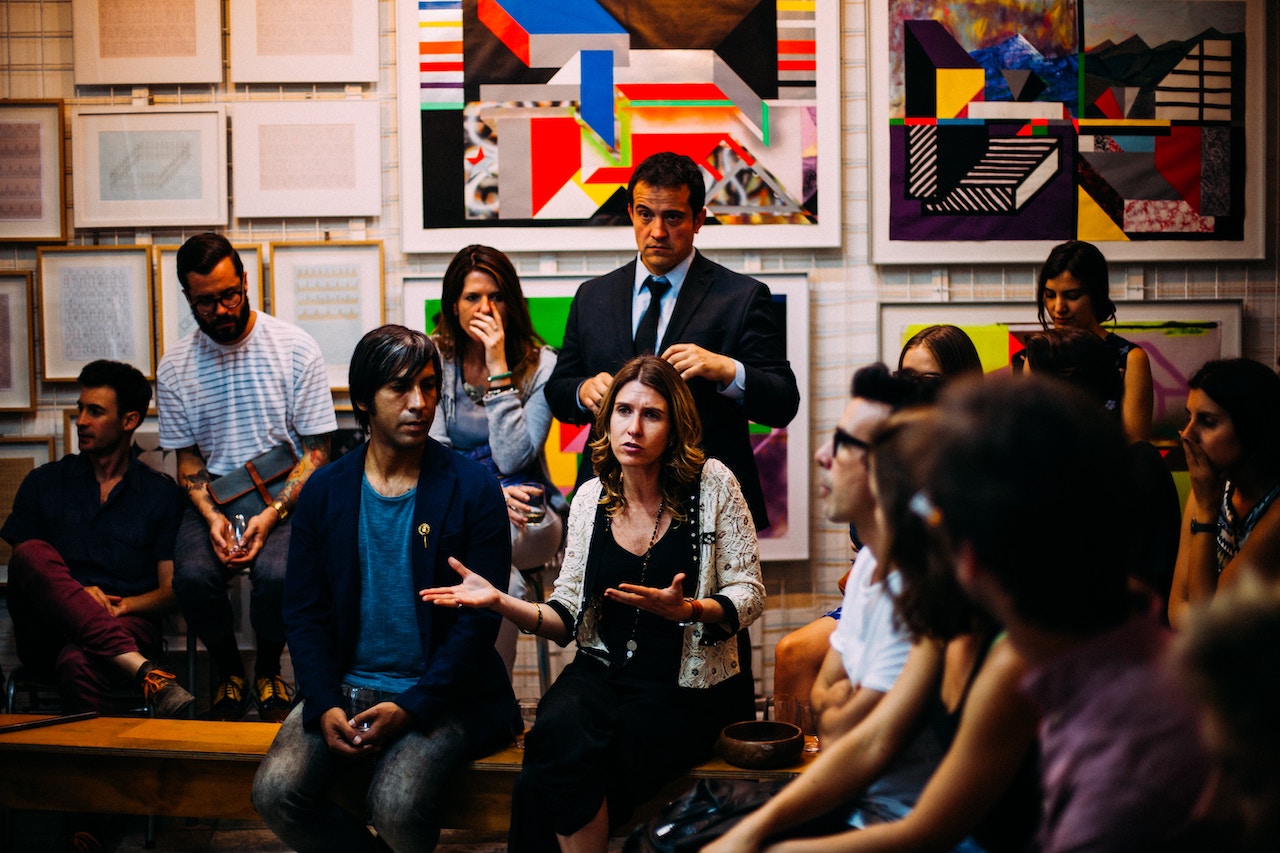 I have harboured a lifelong dislike of feedback. I didn’t like it in secondary school when a kid on the bus told me my brand new trainers were “too bright.” And I didn’t like it when a potential client heard my proposal pitch for their digital project and said, “I hate this idea.” Turns out my trainers were pretty bright, and my pitch wasn’t the best. Still, those experiences and many others like them didn’t help me learn to stop worrying and love the feedback process.

We can’t avoid feedback. Processing ideas and synthesising feedback is a big part of what we do for a living. I have had plenty of opportunities to consider why both giving and receiving feedback is often so emotionally charged, so challenging to get right.

And here’s what I’ve found to be true.

When a project is preoccupying us, we often don’t think about it as something external and abstract, it’s usually always emotionally driven. We think about it more like a story, with ourselves in the middle as the main protagonist—the hero. That might seem melodramatic, especially if your work isn’t the kind of thing they’d make an inspirational movie about. But there’s research to back this up: humans use stories to make sense of the world and our place within it.

Our work is no different. We create a story in our heads about how far we’ve come on a project and about where we’re going. This makes discussing feedback dangerous. It’s the place where someone else swoops in and hijacks your story.

Speaking personally, I notice that when I’m giving feedback (and feeling frustrated), the story in my head goes like this: These people don’t get it. How can I force them into thinking the same way I do so that we can fix everything that’s wrong with this project, and in the end, I don’t feel like a failure?

Likewise, when I’m receiving feedback (and feeling defensive), the story goes like this: These people don’t get it. How can I defend our work so that we keep everything that I like about this project, and in the end, I don’t feel like a failure?

Both of these postures are ultimately counterproductive because they are focused inward. They’re really about avoiding shame. Both the person giving and receiving feedback are on opposing sides of the equation, protecting their turf.

But like a good story, good feedback can take us out of ourselves, allowing us to see the work more clearly. It can remove the artificial barrier between feedback giver and receiver, refocusing both on shared goals.

Change your habits around feedback, and you can change the story of your project.

Here are three ways to think about feedback that might help you do just that.

Good feedback helps us understand how we got here

Here’s a story for you. I was presenting some new wireframes for an app to to a client on the project. There were a number of stakeholders and advisors on the project, and I had integrated several rounds of their feedback into the harmonious and brilliant vision that I was presenting in this meeting. That’s the way I hoped the story would go, anyway.

But at the end of the meeting, I got some of the best, worst feedback I have ever received: “We’ve gotten a little carried away with this concept. Maybe it should be simpler. Maybe something more like this …” And they handed me a loose sketch on paper to illustrate a new, simpler approach. I had come for sign-off but left with a do-over. Every freelancers worst nightmare.

I felt ashamed, frustrated. How could I have missed that? Deep down I knew however, even though that feedback was hard to hear, it was spot on. I walked away able to make important changes, which led to a better outcome in the end. Here are the reasons why:

First, the feedback started as a conversation. Conversations (rather than written notes or emails) make it easier to verify assumptions. When you talk face-to-face you can ask open-ended questions and clarify intent, so you don’t jump to conclusions. Talking helps you find where the trouble is much faster.

The feedback connected the dots between problems in our process so far (trying to reconcile too many competing ideas) and how it led to the current result (an overly complicated product). The person who gave the feedback helped me see how we got to where we were, without assigning blame or shaming me in the process. What was the behaviour/action and what was the impact.

The feedback was direct. They didn’t try to mask the fact that the concept wasn’t working. Veiled or vague criticism does more harm than good; the same negativity comes through but without a clear sense of what to do next.

DON’T GIVE FEEDBACK UNTIL THE TIMING IS RIGHT

Feedback isn’t useful if it’s given before the work is really ready to be looked at. It’s also not useful to give feedback if you have not taken the time to look at the work and think about it in advance. If you rush either of these, the feedback will devolve into a debate about what could have been, rather than what’s actually there now. That invites confusion, defensiveness, and inefficiency.

Good feedback should have enough specifics to clearly identify the problem. But, usually, it’s better to not give a specific solution. The feedback in this example goes too far:

The background behind the menu items is a light blue on a darker blue. This makes it hard to see some options. Change the background fill to white and add a thin, red border around each square. When an option is selected, perhaps the inside border should glow red but not fill in all the way.

Instead, feedback that clearly identifies the problem is probably enough:

The background behind the menu items makes it a little hard for me to see some options. Any way we might make it easier to read?

Give the person whose job it is to solve the problem the room to do just that.  They might solve it in a better way that you hadn’t anticipated.

When you acknowledge a mistake openly and without fear, it gives permission for others on the team to do the same. This refocuses energies away from ego-protection and toward problem solving. I chose to admit I got it wrong on that app project I mentioned above; the client had it right and I told them I was glad we simplified the app. Saying that out loud was actually easier than I thought, and our working relationship was better for it.

Good feedback tells a story about the future

Lastly, I’ve found that most useful feedback helps us look beyond the present state of our work and builds a shared vision of where we’re headed.

One of maybe the most overlooked tools for building that shared vision is actually pretty simple: positive feedback. The best positive feedback acknowledges great work that’s already complete, doing so in a way that is future-focused.  Its purpose is to point out what we want to do more of as we move forward.

In practice, I’ve found that I can become stingy with positive feedback, especially when it’s early in a project and there’s so much work ahead of us. Maybe this is because I’m afraid that mentioning the good things will distract us from what’s still in need of improvement.

But ironically, the opposite is true: it becomes easier to fix what’s broken once you have something (however small) that you know is working well and that you can begin to build that larger vision around.

So be equally direct about what’s working as you are with what isn’t, and you’ll find it becomes easier to rally a team around a shared vision for the future.  The first signs of that future can be found right here in the present.

OH AND ONE MORE THING: SAY THANK YOU.

Thank people for their contributions. Let me give that a try right now:

Thank you for reading this article. It seems wise to get some feedback from others when writing about feedback. So I look forward to hearing your feedback.

Finally, thank you Antenna on Unsplash for the photo used in this article.

Focus on What You Do Best and Outsource the Rest